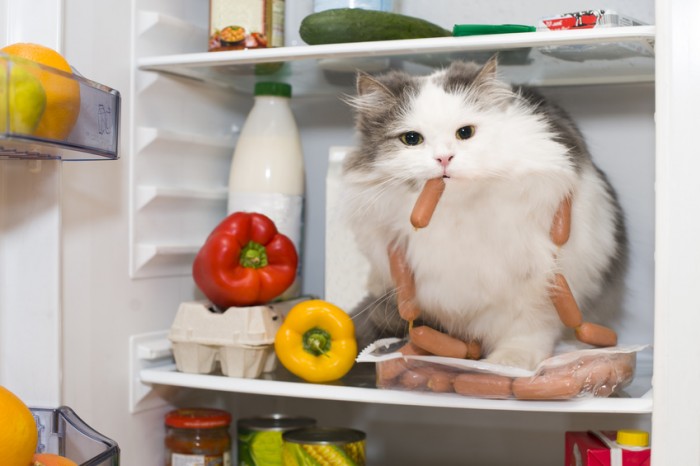 My name is Hairy Yogurt Das, and I have an unconditional love of pussy.

There, I said it.

Of course, I am talking about my cat. I just find it funny to say it that way. If you find it in bad taste, I sincerely respect and appreciate your choice to feel that way. But I still find it funny.

From a young age, I found it natural to love animals. I should be clear, I’m talking about non-human animals here. The human animal has proven substantially more challenging to love.

I’d love to have a dog, but the closest I’ve ever gotten was a bunch of dogma. My karma has been cats, and I’m cool with that. As a matter of fact, I feel it has been more valuable for me in terms of experiencing unconditional love.

You’re probably thinking, “What the fuck is he talking about? It’s dogs that give you the unconditional love. Cats can be real assholes.”

Ain’t that the truth! But hear me out…

Dogs are so cool because they love you unconditionally; allowing you to feel it as the recipient, as well as leading by example.

Cats, on the other hand (much like human animals), can give you endless opportunities to love them unconditionally, despite the fact that their asshole-factor rating is all over the chart, depending on only God knows what.

My Real Challenge with Unconditional Love

Like many folks on any type of spiritual journey, I quickly realized that the real issue I was having with unconditional love was that I simply didn’t love myself.

Yes, all of that new-age stuff about not being good enough, or I’ll love myself when I accomplish this or that, or only when I finally deserve it (without any real idea of how that would be determined).

I was eyeballs high in that shit and the tide was coming in. So despite that fact that it didn’t appear to be working, I stuck with my old-standby path of Jnana Yoga.

I truly wanted to feel unconditional love for everyone. Hell, I would have settled for at least someone. But I just couldn’t intellectualize my way to love.

The Grace of a Feline Guru

I can’t say with any real clarity if it happened in an instant or slowly over a period of time. One day it was just there; my unconditional love of this bitchy cat.

Just a brief history of the relationship to set the stage:

I found this kitten, abandoned by his mother, under a shrub in the neighborhood. No sign of any mother cat or other kittens. He was so young that his eyes were barely open. The vet said he was only about a week old, and that it was rare for a mother cat to abandon a kitten. Either the mother had died or… there was likely something wrong with this guy.

For many weeks I had to bottle feed him at regular intervals, which entailed waking him up several times a night. There was also the assistance he need to piss and take a dump. I’ll spare you all the details, but it did involve “stimulating his anus”, as the vet so eloquently put it.

Within weeks he was active and causing all sorts of interesting predicaments, including:

Being OK with all of this… well, that wasn’t my normal MO. Looking back now, it seems funny that I was able to put up with it. My OCD tendencies and above average sensitivity to anything involving bodily fluids should have had me climbing the walls.

To top it off, I wasn’t getting any of the normal affection I was used to from cats (even if it was sporadic). There were no cuddle sessions, no sleeping by my feet at night, no purring. Just an awful lot of hissing, puking and pissing.

This wasn’t my kid. I didn’t actively create him, nor did I adopt him. I was out for a run, and there he was. This cat was part of my karma.

My love for this bitch was both unconditional and unconscious. I realize now that I had no expectations of him.

Sure, I would have preferred a cozy and less disgusting relationship with him. And yes, I did initially attempt to change his behavior. It only got worse.

But the fact that I hadn’t laid upon him my expectations, allowed me the freedom to love him unconditionally. And through that experience of being the unconscious provider of unconditional love, I was transformed.

I just didn’t know it yet.

Fast-forward twenty-two years… yep, he’s still kickin’. At this point he’s been with me almost half of my current incarnation.

For the first 17 years, what I described in the bullet points above was the status quo. And I kept having no expectations and just loved the shit out of him, in any way he would allow.

Then he began to mellow, or go senile… or both.

These days, 98% of the time he eliminates bodily fluids in the desired locations. He also seeks out my physical affection, lying on my lap for hours at a time… purring. Then, out of nowhere and for no known reason, he hisses and jumps down. But returns within the hour for more.

When he is getting physical affection from me, he not only purrs, but he also drools, a lot. Seems so fitting that even the outward expression of his happiness is a little on the gross side.

And so it was, that long before I could conceive of my eventual yearning for something more, my unconditional love of pussy opened my heart without me even knowing it.

And the seed was planted.