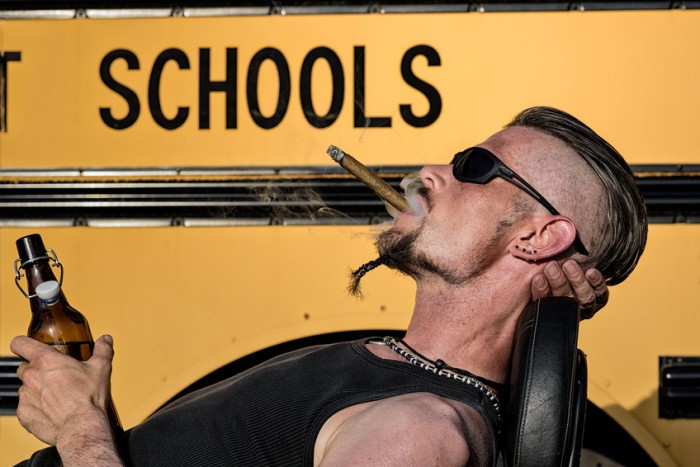 Let’s get a little bit deeper into the nondualistic perspective, or non-dualism.  Nondualism basically means “not two”.  The ultimate truth is oneness or unity of all that is, as in Oneness of being.

If you want to seem more spiritually trendy, refer to it as Advaita which means the same thing but sounds all Eastern and legit.

Boys and girls, this is not for the timid.  This shit is renegade spirituality.  It’s the pool of consciousness where the big boys go specifically to freedive in the deepest waters.  No floaties allowed.  And it’s fucking deep, dark, and lonely at times.

And while HYD is a loving, chanting, kind-hearted, jovial bhakti mother-fucker, he is at the core level also a “Nondualistic Bad-Ass in Black”.

In order to transmit what this approach basically means relative to the broader community of “spiritual” seekers, I wrote this tiny poem, leaning heavily on the work of a lyrical genius named Kid Rock.

I’m a nondualistic badass in black

You can roll with me or you can suck my crack

I bring no flash or flair

Why the “in black” you may ask?  Three obvious reasons:

First, a friend of mine with the initials SPH, when queried on why he always wore black, replied simply, “Because I think it makes me look cool.”  And he was right, it did. 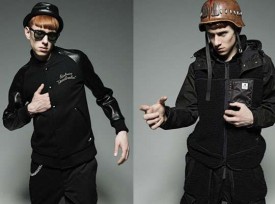 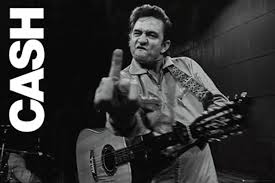 Ultimately, if you want to ride the big ride, it’s where you will end up.  Maybe not in this lifetime, but if you are serious about going through the “gateless gate”, you’ll be turned away as long as you’re toting a bag of dualistic beliefs.

Duality is the land of opposites.  Good/bad, ugly/beautiful, fat/skinny, nice/mean and so on.  It’s a game of relativity and separateness.  You must cop a reference point to evaluate reality as it relates to your position, or in most cases, any belief.  A belief creates a ledge in the dark abyss that you can get a footing on and then interpret “what is” from that perspective.

Hopefully you will find enough others that will corroborate your position in space, time, meaning and belief that through consensus reality, you can build an identity, opinions, perspectives, etc.

This sounds harmless enough… until it isn’t.

The Alternative to Dualism

The nondualistic badass in black, and maybe you too if you’re lucky, eventually realizes that it’s all gymnastics of the mind.   If truth is bigger than thought, thought can’t hold the experience of truth.  Your sense of self  is nothing more than thought, and will never be bigger or closer to truth than “you” are now.

In order to get off your craggy ledge of false reality, you have to start to questioning ALL beliefs.  To go beyond beliefs the non-dualist has to be willing to blow them up.  This is why many play with the concept of non-dualism but few are truly non-dualists.

Let’s face it; we’re attached to many of our beliefs as well as aversions (also based on beliefs).  If you have any semblance of an enjoyable life, it’s kind of risky putting a blowtorch to it.  Like Jed McKenna (a fierce non-dualistic bad-ass in black) says, “You can’t negotiate with fire and nothing doesn’t burn.” 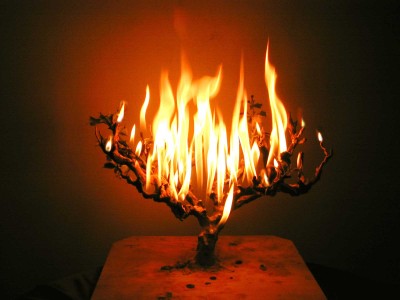 That’s right fun seekers.  The non-dualist embraces that not only are beliefs that limit us false, but so are the beliefs that empower us.  Ultimately they too are purely relative in the end.

For example, say you have the belief that you are generally a good person.  You add dimension to this belief by explaining you regularly give money to charity, don’t needlessly argue with others, and always try to do your best at work.

Let’s look at these in detail, one at a time.

Belief #1: You regularly give money to charity, and that’s a good thing to do.  In this case it’s a homeless shelter.  Upon closer examination, many people in the shelter find that having a safe, climate controlled environment with a bathroom at night is pretty sweet.

As a matter of fact, so sweet that there isn’t much motivation to move beyond their current situation.  So a few of the nightly residents eagerly put a needle in their arm whenever they can beg, borrow, or steal enough money to buy a fix.  Sometimes, they may even beat the crap out of another homeless person to steal their money and support their habit.

This is rewarded by you funding a nice comfortable place for them to sleep each night and protects them from eventually hitting the level of rock-bottom that may inspire deep change.  You’re enabling and perpetuating destructive behavior that may seriously hurt them and others.

You failed to look at the fact that this shelter has no drug treatment requirements to participate and that 40% of the donations actually go to the administrative cost of the operation (big salaries) vs. food and beds.

So relative to all this, you’re an idiot and may very well be doing more harm than good where the rubber meets the road.

Belief #2: You are respectful and not and an asshole when dealing with others and this is good.

However, you know that your sister is being abused by her boyfriend. You want to help and provide support if she wants to make a change, but don’t want to directly confront her head on as it could be emotionally painful for both of you.

Shit, you’re being respectful.  To make matters worse, she has a five year old son from a previous boyfriend who lives with them and likely is exposed to this violence.  This jackass boyfriend, being the only adult male example in this boy’s life, is modeling behavior for how to deal with stress, frustration, etc.

You don’t know it but three months from now, her boyfriend will come home really drunk after getting fired from his job and this time put her in the hospital with permanent brain damage.  While her son (your nephew) watches and realizes that the only way to psychologically respond to this is to identify with the aggressor.  That’s one way that abused children become abusers.

Guess what?  You’re being respectful and not challenging her to address the elephant in the room. However, being “nice” eventually helped contribute to her worst nightmare manifesting.

Belief #3: You’re a hard worker, and again this makes you a good person.

Unfortunately, in this case, your best isn’t good enough.  Although you worked nights and weekends on the annual financial plan, you baked in assumptions around growth in existing customer revenue and decreased new customer acquisition costs that may have worked in the early stages of your company’s maturation but simply haven’t been able to scale.  Revenue is not in line with targets and expenses are rising.

As a result, your company needs to lay off  30 people… the week before Thanksgiving.  You worked hard, made some bad assumptions, fucked up the business plan and 30 people’s lives at the same time.  Are you still a good person?

So in summary, you’re enabling drug addicts and allowed your sister to get abused to the point of hospitalization, resulting in a hellish childhood for your nephew.  While doing all this, you managed to put your company’s future at risk, gave the shareholders a horse shit return on their equity and got 30 coworkers laid off before the holidays.

And that’s just through this year’s efforts at being a “good person”.

Choosing Your Perspective… Or Not?

So what is it?

Are you a complete piece of shit? 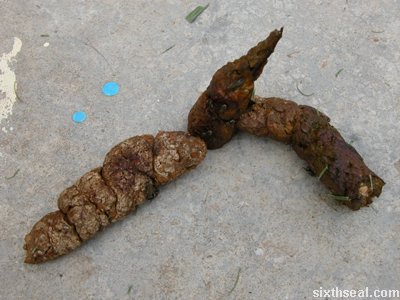 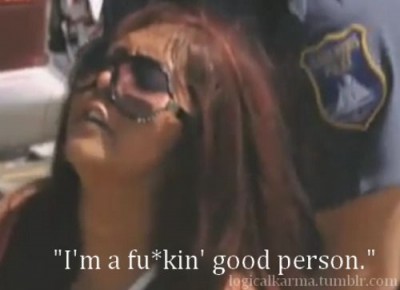 It all depends on where you stand when you look at it.  It’s relative.  It’s dualistic because there is a sense of good and bad.  You can pick your beliefs or where you stand when you take inventory of your life to have the best view possible.  But doing so just perpetuates beliefs that support a fictitious identity about who you are; you’re just building a sense of self or ego.

So the Nondualistic Badass in Black with the middle finger in the air is basically saying “fuck you” to belief-based reality.  It’s not for pussies and can leave you hanging in the void with nothing to cling to.

Ultimately that’s where they want to be and where they’ll realize that what they thought they were wasn’t anything real at all.  But something is still aware, perceiving, and being.  What they’re doing is emptying the cup so they can receive what is and who they really are.

Self-nihilism is the means and the end game is truth.  To become one with everything means there is no other.  Not two.  As long as you exist as an individual there are at least two, and separateness creates relative beliefs.

People usually begin this journey by questioning basic beliefs and practices, letting them go or interpreting aspects of reality without judgment. You can start in the shallow end and learn to move around and get used to the water.

Then, look at your thoughts that make you feel good or bad and drill down to what the belief upon which that thought is based.  Challenge the belief, let it go, and practice viewing your world without that belief.  Your belief system, much like Rome, wasn’t built in a day and won’t likely be deconstructed in a day.

I don’t read a lot of spiritual shit these days as it’s mostly someone trying to sell a better world of hope and comfort to make money.  That said, feel free to visit our Resources Page HERE and check out any of the books by Jed McKenna, Robert Ferguson, or Fred Davis. These guys do a better job than I ever could of writing and speaking of the nondualist perspective.

So in summary, ALL BELIEFS ARE SHIT.  The idea that you are some separate entity is purely fictitious crap you’ve bought into that now protects your consciousness from having any real spiritual experience.

In the end there is only one thing going on and we are all it.

P.S.  Don’t hate me because I’m a nondualistic badass in black, with my long hair swinging, and my middle finger in the air.